Start here for a primer on what defines a doorbell camera, who video doorbells work best for, how to install most models yourself, and how the technology works to protect your home.

What Is a Doorbell Camera?

Who Is a Video Doorbell For?

How to Install a Video Doorbell

U.S. Metros with the Most Package Theft

How Does a Wi-Fi Doorbell Camera Work? 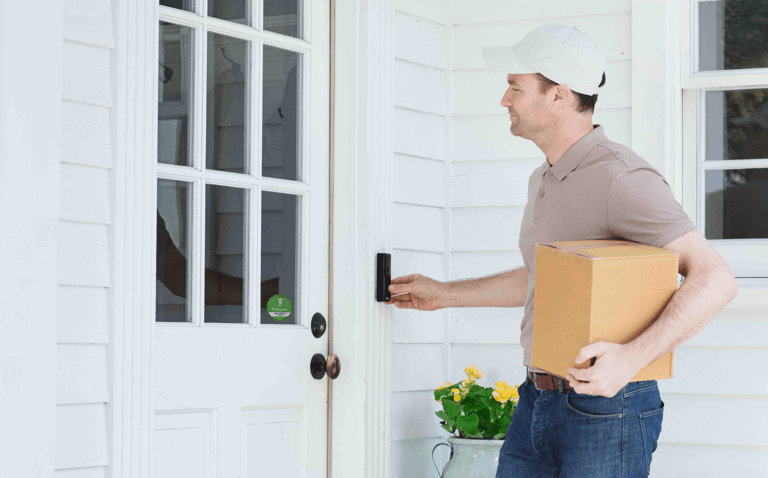 What Is a Doorbell Camera?

A doorbell camera is a traditional doorbell and a bona fide smart home security camera in one device.

Doorbells with cameras bring added convenience to the doorbell experience for both you and your visitors—unless your visitors are porch pirates.

With these abilities, the video doorbell helps you screen visitors, connects you with the visitors you care about in an immediate and personal way, and gives you the flexibility to do both anywhere you take your phone.

Who Is a Video Doorbell For?

Anyone who wants to screen visitors or answer the door virtually might enjoy having a video doorbell. But there may be circumstances in your life that can make a front door camera feel especially safe and comforting.

How to Install a Video Doorbell.

If you choose a smart video doorbell that requires professional installation, you can coast through the process!

If you’re leaning toward DIY instead, be aware each smart doorbell installs a little differently, but most models follow three basic steps: (1) unscrew the old doorbell, (2) tidy a few wires or install the battery, and (3) screw in the smart doorbell.

For a closer look, scan the sample instructions below. These instructions use the Frontpoint Doorbell Camera as the reference device.

U.S. Metros with the Most Package Theft.

Porch pirates strike almost everywhere, and these cities are particularly vulnerable. If you live in one of these areas, a doorbell security camera could be a smart investment. Source: SafeWise

How Does a Wi-Fi Doorbell Camera Work?

With a traditional doorbell, pushing the button sends an electrical signal through your home and triggers the bell in your hallway.

With a wired doorbell video camera, pushing the button also sends an electrical signal through your home and triggers the bell in your hallway. But other actions happen in quick succession using additional technology like Z-Wave and Wi-Fi networks:

Wireless doorbell cameras use electricity too, but in battery form. This usually means they come with their own separate digital chime, which receives a signal from the button over Z-Wave or Wi-Fi networks.

Frontpoint: Guardian and Greeter of Your Front Porch.

Thank you for your request!

A home security specialist will contact you shortly to provide you with a FREE quote.

Finally, a home security system that earns your trust.

Frontpoint’s 9.3 Trustpilot rating says it all. Get a free quote.

Get a free quote