In 2009, Rutgers University concluded a 5-year study – the first of its kind – which focused only on the impact of a home security system on residential burglaries, while scientifically ruling out other factors that could have influenced burglary rates. Here are three points from the study that we think you should know:

1)      The presence of a home security system will decrease the chance of a burglary.

“Data showed that a steady decrease in burglaries in Newark between 2001 and 2005 coincided with an increase in the number of registered home burglar alarms,” said study author Dr. Seungmug (a.k.a. Zech) Lee.

But how do burglars know that a home is protected? From Dr. Lee’s statement, it can be inferred that the public display of your home’s protected status plays an important role in deterring burglars as well. Yard signs and window decals should be the first line of defense, while the alarm system should be the last. After all, you want burglars to know that your home is protected and should be avoided. But does this mean that they’ll just move on to your neighbor’s home, though? There’s evidence that suggests that’s not the case:

2)      Your neighbors are also protected when you own a home security system.

This showed that there was no indication of any spatial displacement of residential burglaries from protected houses to nearby houses and indeed that burglar alarms tended to provide protection to these other houses. In short, a burglar alarm, as a target-hardening measure of situational crime prevention, not only protects the home without displacing burglary to nearby houses, but, in fact, also provides these other houses with protection from burglars.

Even if your neighbors don’t own systems, the study shows that they can still benefit from the fact that you own one. If one house is protected, burglars may avoid the surrounding houses as well. This does not mean that your system has the ability to protect multiple homes, but rather that your system does provide a potential benefit for your neighbors. Burglars will probably avoid a group of homes upon seeing that one of them is protected, but there is nothing to stop them if they target a house that doesn’t have a security system.

3)      Communities with a higher density of security systems will be safer as a whole.

City-wide spatial analyses showed that, (1) dense concentrations of burglar alarms existed, (2) these concentrations were in considerable proximity, and (3) they were isolated from the hotspots of resident burglaries. Such a pattern was taken as evidence of “diffusion of benefits,” suggestion that burglar alarms had a positive impact on the immediate neighborhood by decreasing residential burglaries.

Since protecting your own home has the potential to also protect your neighbors’ homes, it’s only logical that a greater number of protected homes would have the same effect on a larger scale. A neighborhood would benefit from having more residents with security systems in their homes. Think about it from a burglar’s perspective: Is it worth the risk of trying to enter a home that’s located in a neighborhood with a high density of protected homes?

As the evidence on the effectiveness of home security systems continues to grow, we hope more people agree that having their own security system can offer significant benefits. We also hope customers choose a company that is committed to their safety and security – like FrontPoint. FrontPoint strives to provide the best home security service available, while offering systems that are safer, smarter, simpler, and more affordable. If you want to see why we’re the #1 ranked home alarm company in the US, just check the reviews. You could be the start of a safer neighborhood. 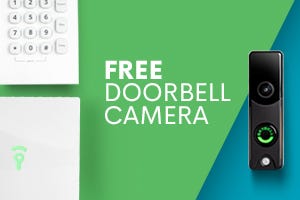