How to Put Out an Electrical Fire & Prevent One

How to Put Out an Electrical Fire & Prevent One

According to the U.S. Fire Administration (USFA), there were about 24,000 electricity-caused residential fires reported each year between 2014 and 2016. And electrical malfunctions accounted for 6.8% of all residential fires in 2018. Compared to fires caused by cooking and heating equipment, this seems like a small number.

It’s important to learn how to prevent electrical fires and how to react if one happens. In this article, we discuss:

Don’t forget that working smoke detectors or smoke and heat sensors save lives. When these devices are present and properly maintained, they give you and yours precious time to react and escape in the event of a fire, whatever the cause.

According to the USFA, home electrical fires usually start in occupied parts of a house, with 15.4% igniting in the bedroom, 7.4% in the cooking area, and 6.7% in the living area. This makes sense; we use our electronics in these places. However, many electrical fires also start in inaccessible or rarely-visited locations—8.7% start inside wall spaces, and 13% start in the attic. This data matches up with the materials that ignite first in home electrical fires, which are:

To prevent home electrical fires, prevent your electronics from generating sparks or too much heat. In practice, this means caring for your electronics so that you don't overload your circuits, and the electricity stays where it should. To do this, it helps to understand a bit about how your home’s electrical system works.

Multiple branch circuits distribute electricity throughout your house. For instance, you likely have one circuit for your kitchen and others for your bedrooms. The power to each of these circuits, as well as to the entire house, is controlled by the breaker box. The breaker box, likely located in the garage, closet, or outside, has switches called circuit breakers that control the power to each branch circuit, plus a main breaker that controls power to all of the circuits.

Besides enabling electricians to cut off the power before they work, breaker boxes help prevent electrical fires. The breakers have mechanisms that “trip” and break the circuit when it is carrying more electricity than it can safely handle. Circuit overloads can generate enough heat to ignite fires.

Circuit overloads happen for two main reasons. The first is that too many devices are using too many amperes (amps) at once. An amp is a measure of how much electricity is flowing through a circuit. Think of it like the volume of water flowing through a pipe. Most branch circuits are rated for 15 or 20 amps; the number will be printed on or next to the breaker switch.

The second cause of a circuit overload is a short circuit, which, again, is frequently implicated in electrical fires. In an electrical circuit, electrons flow through wires and perform work in the connected appliances. A short circuit happens when a path is provided for electrons to flow without very much resistance. This unrestricted flow uses far more amps than normal, overloading the circuit. Short circuits can generate heat or sparks and arcs that ignite fires.

Whether it’s from a short circuit or another cause, breakers repeatedly tripping without an apparent reason is a sign of electrical problems that could be a fire hazard. Consult an electrician!

The statistics we looked at show that electrical fires happen when equipment is misused, overloaded, poorly made or installed, or when it wears out. Prevent circuit overload by maintaining your equipment. In particular:

To stay within the limits of your power strips and extension cords, follow these rules:

Protecting power cords from damage extends the life of your electronics, saves money, and reduces the risk of electrical fires. When wiring insulation frays and tears, sparks and short circuits can result. Prevent damage by not allowing cords to pinch or kink, and by grasping the plug, not the cord when unplugging a device.

When cords become frayed or worn, replace them.

Always hire licensed electricians to work on your home’s wiring. Maybe Dave down the street knows a guy who will re-wire your house for 1/4 the cost of a licensed electrician. But ask yourself why this is—and whether it's worth the risk. Under-the-table jobs may involve corner-cutting, subpar materials, and jury-rigging. Fly-by-night electricians also don’t have bonding and insurance. When it comes to electricity, “It’ll be fine” and “I know a guy,” just don’t cut it. And it’s often illegal. Various electrical and fire codes regulate who can do electrical work and how it’s done.

Licensed electricians know and follow electrical and building codes that prevent the arcs, sparks, heat, and overloads. And paying for quality work means paying for safety. Consider this story of a family who lost their home to a fire because of incorrect wiring.

out an electrical fire

It’s essential to know what to do if an electrical fire does happen. As with all fires, don't try to be a hero. That's what firefighters are for. If a blaze gets too big, don't try to fight it; just escape safely and call 911. If you decide that you can tackle a small fire in its early stages, remember these tips:

Never use water to extinguish live electrical fires. Water readily conducts electricity, and pouring it on an electrical fire can create dangerous sparks and electric shocks. For an example writ large, check out this video of some poorly-trained firefighters spraying water on burning utility equipment. No firefighters are hurt in this video, but someone was likely held accountable:

ABC extinguishers, which work for all three, should be in every home. Know which kind of fire extinguisher you have and how it works so that you can use it confidently and safely, should the need arise.

Electrical fires, while less common than other fires, can disproportionately destroy life and property. Electrical arcs, sparks, and heat from malfunctioning equipment or overloaded circuits can ignite surrounding material. Fortunately, you can keep yourself and your family safe from electrical fires with some simple steps. Don't overload your circuits, use power strips and extension cords safely, protect cords from damage, and always hire licensed electricians for electrical work.

If an electrical fire happens—and it is small—you may be able to fight it. First, disconnect the electricity if you can do so safely. Importantly, never use water to put out fires involving charged electrical equipment. Instead, use a Class C fire extinguisher; an ABC fire extinguisher should be in every home.

All homes should also have smoke detectors or smoke and heat sensors, which buy you precious seconds to escape in the event of a fire. The National Fire Protection Association (NFPA) recommends installing smoke detectors in each bedroom, outside sleeping areas, and on every floor of your home. For added protection, consider a smart, networked device such as Frontpoint’s Smoke and Heat Sensor.

Unlike traditional smoke detectors, smart sensors alert you with noise and send external notifications. Frontpoint’s Smoke and Heat Sensor is also monitored along with other elements of a Frontpoint home security system; when the sensor gives an alert, monitoring personnel will call you to determine if there is an emergency. If they cannot reach you after two attempts, they summon emergency services to your address. This ensures that help is on the way if you aren’t home and are unreachable—or you are home and can’t call for assistance yourself.

For more information on household fire safety, check out our blog entries covering: 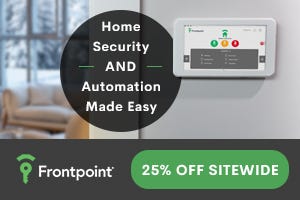