Do Security Systems Work If the Power Goes Out?

By: Jesse Siegel
January 13, 2020
No comments
More from this author

Do Security Systems Work If the Power Goes Out?

battery-powered security systems will keep working during a power outage

Pew Charitable Trusts research “shows that the United States experiences more electric outages than any other developed nation,” with “an average 100 major outages a year” between 2010 and 2015.

Power outages throw everything into chaos and they can leave you feeling vulnerable. Will your home security system protect you if the power goes out?

The answer depends on two things:

By understanding the communication and power requirements of your home security system, you will know what capabilities you have (and for how long) during a power outage.

power, can security devices “talk” with one another—and talk to a monitoring

Home security systems depend on communication. Whether it’s a low-tech system that only generates an alarm or a high-tech smart system with home automation and professional monitoring, the different devices in the system must send signals. This communication can involve signals sent:

Let’s examine how each of these technologies works to determine whether it can function in a power outage:

Some home security devices—wireless cameras in particular—rely on Wi-Fi to communicate with the security system, cloud storage, and any apps that control them. This simplifies setup by allowing components to be placed anywhere within range of a router, and Wi-Fi’s bandwidth is necessary for transmitting large amounts of data like video.

Wi-Fi routers and modems use power (although not very much) to receive the Internet and broadcast it through radio waves. This means that Wi-Fi and any home security components that depend on it will not automatically work when the power is out.

If you are concerned about power outages, you can invest in back-up batteries to power Wi-Fi routers and modems—as well as any devices, like cameras, that depend on a plug-in power supply.

While they can’t run forever, routers and modems can last a decently long time on a back-up battery because of their low power draw. A 650VA battery can power a router and modem drawing 20W each for about 80 minutes, possibly more. Batteries get more expensive as their capacity increases.

Z-Wave (along with a similar technology, ZigBee) uses the same basic signal as your home’s Wi-Fi—radio waves. But it differs in two ways. First, it is transmitted at a different frequency than Wi-Fi. Second and most importantly, Z-Wave is transmitted from individual smart devices directly to the system’s control panel/hub rather than using a modem. This does not involve the Internet and so the devices do not depend on a router keeping power.

All battery-powered Z-Wave devices, be they light bulbs or window sensors, can talk to one another in a power outage. Because Z-Wave uses far less power than Wi-Fi, the standard battery lifespans of most devices that use Z-Wave are typically measured in years—they’ll continue to work during average blackouts.

Landlines: old-school and starting to go away, but they

will work without power

Telephone lines have been part of home security systems for most of the industry’s history. But today, the landline is low-tech and being phased out of residential use. It has the core vulnerability of being cuttable; career burglars have indicated that severing the phone line is one of their go-to methods for disabling a home security system.

A landline will tend to work in a power outage, however. Telephone lines have a minuscule power demand and draw power directly from the telephone provider’s power source.

Cellular systems also keep working when the power is

Security systems that use a cellular signal for outbound communication do require a small power supply to send signals. Thus, a security system control panel that has a battery back-up will stay functional in power outages, as long as a cellular signal is available. This capability, along with the inability for these systems to be defeated with a set of wire cutters, makes cellular security very reliable.

In rolling blackouts or planned outages like those happening in California, a cellular signal will be available; telecommunication companies take care not to lose power in such events. It’s important to note that in extreme weather events, however, there are no guarantees that the cell towers will not be damaged. Simultaneous loss of power and cell service won’t be the norm, but understand that it is a possibility.

The most advanced security systems mitigate this issue by transmitting at a much lower frequency than what’s required for voice conversations over cellphones—helping the system’s cellular connection remain strong even if overall coverage in an area is weak.

With its built-in redundancy, a security system from Frontpoint can keep working for a full day if the power goes out. The Frontpoint Hub—the brains of the system—will switch between Wi-Fi and cellular data to communicate with the monitoring service and your computer, smartphone, or tablet.

If one goes down, it switches to the other automatically. All of Frontpoint’s intrusion sensors, environmental sensors, and home automation sensors rely on low-energy Z-Wave for communication between devices and with the Hub, many of which have battery lifespans of about 1 – 5 years (or more). This means that your home will stay secure in a power outage.

The Hub uses redundant telecommunication and a

The Hub serves as a central “control panel” for a Frontpoint smart home security system—and we took great care to make sure it keeps working. Besides being smash-proof (it will send an outbound signal even if an intruder tries to destroy it before the alarm goes off), the Hub uses redundant communication and it is equipped with a battery to keep working.

The Hub’s built-in backup battery can last for 24 hours when fully charged. This battery takes 24 hours to charge fully and kicks in automatically whenever plug-in power is lost. Investing in a second back-up battery can further prolong the life of your Frontpoint Hub during a long-term blackout.

Some smart security systems only use Wi-Fi. Others only use cellular data. The Frontpoint Hub uses both. To ensure it can always contact the monitoring service and your computer, tablet, or smartphone, it automatically switches between Wi-Fi or a cell signal to reach the outside world.

Check out our article about power outage notifications for more information.

Part of the convenience of Frontpoint’s system is that almost every device can be placed almost anywhere—no wires required. Door/Window Sensors, Glass Break Sensors, Motion Sensors, Flood Sensors, Carbon Monoxide Sensors, Smoke and Heat Sensors, and even the Smart Door Lock all run on battery power.

Most of them use a replaceable cell battery (check here or in your owner’s manual to figure out which device uses which size) and they all can run for years (ranging from about 1 – 5) on a single battery. Basically, a power outage won’t change a thing for most Frontpoint devices. Until the Hub’s backup power runs out, they will keep talking to it with Z-Wave, a communication method likewise unaffected by a power outage.

Security cameras do need backup power and Wi-Fi to

The big exception to all

The big exception to all of this is the cameras, including the Indoor Camera, the Premium Indoor Camera, the Outdoor Camera, and the Doorbell Camera. Because they have a big job to do, cameras use a comparatively large amount of power and need high-bandwidth internet communication.

All of Frontpoint’s cameras have to be plugged into power individually and connected to Wi-Fi to function. Thus, to keep the camera feed running, you need backup power supplies for each camera and the Wi-Fi router and modem. Various battery packs that serve as an intermediary between a device’s plug and an electrical outlet are available for purchase, and some routers have internal backup batteries.

These devices will potentially keep cameras up and running for a few hours, depending on the cameras’ usage during that time and the backup battery’s capacity—which can keep surveillance going during most short power outages. For long-term power, you’ll need a generator (or numerous/large batteries).

But Frontpoint’s system doesn’t require cameras to detect an intrusion or another emergency. The monitoring service never accesses your cameras and they are not a factor in sounding an alarm or calling emergency services.

When the power goes out, the individual Z-Wave sensors will still detect a break-in, a fire, a flood, or carbon monoxide buildup and send a signal to the Hub. And the built-in 24-hour battery in the Hub ensures that an outbound signal will notify you and call for help.

Smart door locks have an average battery lifespan of about a year and they send a low-battery notification well ahead of losing power (as do all of the sensors). But if you didn’t change a low battery in a smart lock for some reason and a blackout hits, it will still work if you temporarily connect a standard 9-volt battery and enter your code.

Whether they are planned by the utility company or severe weather hits, power outages make life difficult.

But a home security system will work in a blackout if it is designed correctly—and the core components of Frontpoint’s smart home security system will function for up to 24 hours without power. To maintain camera access during an average power outage, you can invest in individual battery backups for both the cameras and your Wi-Fi router and modem, whereas longer-term outages will require a generator.

Even when the lights go out, Frontpoint stays with you. We've been revolutionizing the home security industry for over a decade. And we're just getting started. To shop DIY home security systems, check out our Security Packages. If you have questions or would like to discuss a quote, contact us at 1-877-602-5276. 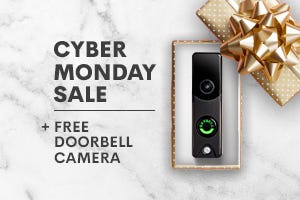