If you leave the lights on 24/7 when you aren’t home—or rely on traditional light timers with fixed, predictable schedules to fool intruders—here’s a message from home security experts: you’re making a mistake. As NPR reports, these home security strategies are not only ineffective, but they can attract attention from burglars.

Smart lights outshine those old-fashioned strategies by turning simple light bulbs into high-tech security devices. They can make your home look lived-in by mirroring how people really use lights.

Leaving the lights on is a home security strategy that’s been passed down for generations. And research certainly supports the notion that well-lit areas deter criminal behavior at night. A recent Crime Lab study conducted in partnership with the New York City Police Department, the Mayor’s Office of Criminal Justice, and the New York City Housing Authority found that outdoor lighting reduced crime by 39 percent in a public housing area.

But here’s the thing: A burglary takes place every 18 seconds in the United States. About a third of these crimes are planned well in advance, with burglars casing neighborhoods and looking for empty targets—when residents are likely to be at work, school, running errands, or on vacation. And lights left burning around-the-clock or on a fixed schedule to scare thieves away can have the opposite of the intended effect. These easily discernible patterns broadcast that the house is empty.

Of course, a dark house after sunset can also stand out as a target for thieves. For most burglars, the break-in strategy is as simple as finding houses where they can get in and out quickly with their loot. They generally avoid targets with obstacles that make that agenda difficult to achieve, like obvious home security systems and people in the house who can quickly call authorities.

Convicted burglars surveyed in a report featured on 7KTVB News of Boise, ID, said lighting can be an effective crime deterrent—but only if it seems like there is a real person behind it. That means outdoor porch lights might go on in the early evening and turn off at bedtime, right before a small light in the bedroom switches on. Indoor lights should ideally occasionally go on and off in different rooms as if someone is moving around.

How to use a timing light—when

Traditional light timers only offer marginal home security. They essentially function as electrical circuits with a built-in clock, turning lights on and off based on pre-set times.

Smart lighting offers far more control and customization. Smart light bulbs or wireless light controls can be controlled through an app or voice commands to a virtual assistant—enabling you to brighten or darken your home at any time from anywhere. Smart lights can also be set to as many varying schedules as you decide to program, automatically turning different lights on and off in different rooms. This won’t create a predictable pattern that makes it obvious that a timer is controlling the lights.

Smart light bulbs look like your average light bulb and they have the same basic electrical components as any LED light. Installation is just as simple: they screw into any existing socket like a regular bulb. So, what’s the difference? Each smart light bulb has a built-in ability to receive and transmit Z-Waves. Z-Wave is a wireless communications protocol that allows smart devices to “speak” to each other through secure radio frequency waves.

Z-Wave’s low-energy frequency doesn’t interfere with Wi-Fi or other household appliances, and it boasts a longer range than Bluetooth. A central control panel that’s equipped with Z-Wave technology—like Frontpoint’s Hub— allows people to manage their smart devices from anywhere in the world, receiving commands and routing them to the intended smart lights or other devices.

Smart wireless light controls are essentially “smart plugs” that also feature Z-Wave capabilities, giving people the ability to turn any lamp or small appliance into a smart device. Simply plug the wireless light control into an electrical outlet and then plug any of your existing lights or devices into it to remotely control their activities.

Once installed, smart lighting devices can be controlled manually, programmed to turn on at sunset, or set to go on and off in a seemingly random sequence. You can vary the times when the lights go on and off throughout the week, so no day repeats and no predictable pattern emerges. It’s also possible to plug in small appliances like radios or TVs to wireless light controls so that they can be part of the ruse, with a television turning on in the living room for a few hours and then turning off when it’s time for bed.

There’s basically no limit to the customizations you can create; you can even set a bedroom or bathroom light to come on for a short period in the middle of the night, so it looks like someone woke up.

smart home security systems for even better protection and conveniences

Connecting smart lighting devices to a smart home security system increases their capabilities, enabling them to work in tandem with other smart home devices. While smart lights can help deter break-ins on their own, they are most effective when they operate as part of a home security network.

For instance, Frontpoint Security’s Z-Wave Hub could command lights to flood a room if someone triggers an intrusion alarm, motion sensor, or home security camera, which can be enough to send intruders scurrying toward the door before they reach your valuables. Lights can also be programmed to turn on if smoke and heat sensors go off, illuminating the path to safety.

Smart lights also work with other connected devices to make life easier, brightening the house when a smart lock senses you arrived at home or dimly illuminating the path to the bathroom in the middle of the night if a motion sensor detects that you’re out of bed.

Frontpoint also enables smart lights to be incorporated into customized “scenes” that can be set to a timer or controlled manually through the app, further increasing security and convenience. A “nighttime” scene can turn off all the lights, arm the perimeter intrusion sensors, and raise the downstairs thermostat automatically, or a “vacation” scene can convincingly mimic human activity by randomly turning lights on and off in different rooms.

Frontpoint even offers Geo-Service capabilities that further automate these conveniences, instructing a home to perform specific smart actions based on the location of your smartphone. Enjoy a warm welcome every day after work when crossing the “geofence” around your office at the end of the day turns on your lights and adjusts the thermostat to a comfortable temperature. Homeowners and renters can also control lights manually through a Keychain Remote, transforming dark homes into inviting places with a single click from as far as 100 feet away.

With so many ways to remotely or automatically control lights, smart lighting ensures that you never have to arrive home to a dark house—or drag yourself out of bed when you suddenly remember that you forgot to turn off the downstairs lights.

Frontpoint’s system will also help you save energy and money by sending an alert if smart lights are left on for too long, so you can remotely turn them off through the app. These dimmable, LED smart light bulbs are designed with energy efficiency in mind, using just 9 watts to achieve roughly the brightness of a 60-watt incandescent bulb. Even better, the average LED light bulb can last for 25,000 hours or more, which is 25 times longer than a traditional incandescent bulb.

convince burglars that your house is occupied

Next time you’re trying to create that “lived-in look” when your house will be empty, consider the perspective of burglars who survey their target, trying to determine if anyone is home. Old-fashioned light timers that switch on and off like clockwork or lights left on 24/7 can make it obvious that no one is there.

A key to good security is smart lights that are programmed to mimic human behavior with no discernible pattern. And Frontpoint Security’s smart home technology gives you the automation and control to convince burglars that a human hand is controlling the lights in your house—even when you’re really dozing on a beach thousands of miles away. 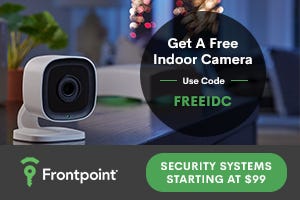 Different Types of Light Bulbs and the Light They Emit

What is a Z-Wave Hub and How Does it Power a Smart Home?
Comments
rosejohan
Thanks for your information
Reply
Leave your comment