We’ve all heard stories about 911 calls that were clearly inappropriate, like the one a Canadian woman made when she thought the taxi she was in would be late to a train station. This example clearly seems ridiculous, but what about truly confusing situations? Events where you need help from police or fire departments but you’re not sure whether it’s really an emergency?

Knowing when to call 911, how to call 911, and finding the non-emergency numbers for your local authorities are important when you need assistance ranging from a true emergency to a mere problem or nuisance.

The consequences of non-emergency

Many people visualize a 911 dispatch center as a place where vast numbers of operators await calls from the public. But you might be surprised at how few 911 dispatchers are available, even in larger cities, and how busy they can be.

For example, in late 2018, Little Rock, Arkansas had a total of 57 911 operators—11 short of their full strength. Given that these operators must cover shifts at their center 24 hours a day, 7 days a week, including holidays—and allowing for sick days and vacations—very few dispatchers might be available at any given time to serve almost 200,000 people and the 246,290 emergency calls that Little Rock received in 2017. Nationwide, the National Emergency Number Association (NENA) estimates that "Americans make about 240 million emergency and nonemergency 911 calls a year."

While technology like improved GPS technology, support for smartphones, and text message capability in some areas has made modern 911 call centers more efficient, the process still depends on human beings answering phones—one call at a time.

The city of Colorado Springs, CO was struggling to hire enough 911 operators as of late 2018, and slow response times made the news. Residents reported wait times to speak with a 911 operator during “life-threatening situations” of up to 12 minutes, and a stroke victim died when it took three calls by his landlord to get help.

For those who repeatedly call 911 when there’s no emergency, either carelessly or maliciously, the penalties can be severe. A Florida woman was arrested in mid 2019 after repeatedly calling and asking police for assistance in contacting a person she claimed was harassing her. There was no evidence that such a person existed. A New York woman made over 24,000 fake calls to 911 before her arrest.

A far more common scenario is inadvertent dialing, especially with phones that are programmed to auto-dial 911. Cell phones in the US can typically call the number even when they’re unlocked, and even if the phone is not provisioned for regular service.

While criminal intent or mental illness are often involved when arrests are made, sometimes people have genuine trouble classifying emergency and non-emergency situations. It’s important to understand exactly what warrants a call to 911.

What is a true emergency?

The National 911 Program, a cooperative effort run by the U.S. Department of Transportation and the Department of Commerce, defines an emergency as “any situation that requires immediate assistance from the police, fire department or ambulance” and provides the following examples:

While the website also advises you to call 911 if you are not sure that something is an emergency, you will encounter many situations that may justify police or fire department assistance, but which are clearly not emergencies.

A neighbor having a loud party next door is not an emergency, nor is a call to the local fire department to find out what to do with discharged fire extinguishers. Only call 911 for situations that require “immediate assistance.”

What to expect when

Stanislaus County, California answers callers with a greeting that is similar to that of other centers across the country: “911, what’s your emergency?” Their website offers simple advice when you’re calling 911 with a true emergency: answer their questions, one by one. This avoids creating confusion and wasting time by repeating yourself and offering extraneous details—mistakes that are all too easy to make when your nerves are frayed, and your adrenaline is up.

911 operators are also trained to ask questions in a sequence that gets the right resources heading your way. They may be able to dispatch units even before they finish asking questions, so don’t assume that no help is coming while they gather more information; the answers you’re providing them are typically being relayed to first responders.

Be prepared to tell them your location, especially if you’re calling from the road or a public place. Enhanced 911 services can sometimes give 911 centers your exact location, but operators are trained to confirm this information, as location data can be wrong or misleading.

The National Emergency Number Association recommends keeping up with the city and county you’re in while traveling. Mile markers, block numbers, cross streets, or the approximate distance from prominent landmarks are helpful in getting authorities to the scene. For example, “about a mile south of Park High School” can be a useful description of an accident scene, but a street address or intersection at the scene would be even better.

If you’re on a divided highway, giving the direction of traffic for the affected lanes can be vital to sending resources from the right intersection or exit. This is especially true if concrete dividers prevent emergency vehicles from crossing a median.

If you’re in a large building like a school or a shopping center, try to give the 911 operator details like “near the back loading dock” or “at the main entrance.” First responders can reach you much more quickly if they don’t have to canvas the entire complex.

If you do mistakenly call 911 or discover during your call that others have already reported an incident, don’t hang up before telling an operator that you don’t need their services. Many 911 centers are obligated to call back and/or send first responders to the location of a call to investigate. For this reason, the National 911 Center recommends that you stay on the line to briefly explain the situation.

If in doubt, call 911—but don’t exaggerate the severity of an incident to try to get police or fire departments to respond faster. A 2002 guide published by Arizona State University reports that this is a common form of 911 abuse, citing the example of claiming “shots fired” during a call about a dispute.

Use non-emergency numbers when it’s

Many municipalities have created non-emergency call centers to route inquiries that require the city’s or county’s assistance but aren’t emergencies. Some have settled on 311 as a number that’s just as easy to remember as 911, but it takes you to a non-emergency operator who can assist you. Other local governments have a published 10-digit general number for city services.

Larger cities like New York City that have embraced the 311 concept may offer multiple ways to receive help from the city, such as a mobile app, social media responses, texts, and a traditional call center. In other cities, you may need to conduct an Internet search for the department you need or check the “blue pages” in your phone book. In some jurisdictions, calling 311 actually reaches the same call center as 911 calls are routed to, but your call is given a lower priority.

Be prepared for certain situations to receive a lower priority, even when one merits a call to 911. Minor traffic accidents with no injury and property crimes that are discovered long after the fact do require a police response—but you may have to wait longer for an officer to arrive if other emergency situations demand their attention. You may have to call non-emergency numbers during regular business hours to receive responses to purely administrative questions or concerns.

Unmonitored smart home security systems leave the dialing to you

An unmonitored home security system will send an alert on your mobile device when intrusion or environmental sensors are tripped—but it leaves it up to you to contact authorities. This provides no help if you’re incapacitated or can’t be reached. We discuss more about this in our previous article on the difference between monitored and unmonitored systems.

If you don’t respond to the alert, no help is coming. Even if you can respond, you may be traveling— which means you can’t simply call 911 and easily get the local dispatchers that serve your home. You’ll need to call your municipality’s regular 10-digit number to be transferred to the 911 center (if you know it) or wait to be transferred via the 911 dispatcher in the area in which you call.

Frontpoint’s home security systems are monitored by professionals for greater peace of mind. When you arm your system, the security sensors (including Motion Sensors, Door/Window Sensors, and Glass Break Sensors) are ready to detect trouble. Environmental sensors (including Smoke and Heat Sensors and Carbon Monoxide Sensors) are always “armed” 24/7.

If one or more of the sensors are triggered, the Frontpoint Hub receives a signal. It then:

The monitoring service will immediately try to contact you twice. If you do not answer or you answer but provide an incorrect password, the monitors will summon help. Users who have smart cameras can view their feed from any device to understand what’s happening (the monitoring service will not view your video feed). Information from the video cameras that you can provide to monitors and/or the authorities can help prioritize your call if a major emergency is taking place.

There is one exception to this protocol: when Frontpoint’s Carbon Monoxide Sensor is triggered, the monitoring service will summon help immediately because the odorless, colorless gas can incapacitate people quickly.

Frontpoint Security subscribers can also activate their alarm system and contact 911 with a single action on the keypad:

The alarm and calls for help can also be triggered through the Frontpoint App or the Panic Pendant, and alerts can be customized based on your security or medical needs.

Reserving 911 for serious threats to life and property is the right thing to do, and it’s the law in many parts of the United States. Using 311 or other non-emergency numbers that are provided by your city or county frees up resources for real emergencies and may get you to the right department faster than calling 911.

Knowing when and how to call 911 isn’t difficult—but it can sometimes take a bit of cool-headed thinking in stressful situations.

And if you are unavailable or incapacitated during a real emergency in your home, a professionally monitored smart security system will ensure that help is on the way.

Spread the word about when to call 911 by sharing this article on social media!

Last chance to save this season! 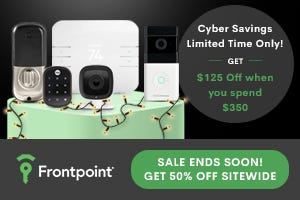 911 Response Time: In An Emergency, How Far Away Is Help?

How to I Prevent Home Security False Alarms?
Professional Monitoring - How to Monitor Wireless Home Security
Comments
Leave your comment