My House Got Robbed! Will They Come Back?

My House Got Robbed! Will They Come Back?

are common—learn how to secure your home

Someone broke into your house and it’s awful. You feel traumatized, violated, and scared. Dealing with the police and your insurance company is exhausting and overwhelming. But at least now the worst is over, right? Not necessarily.

Many people assume that burglars won’t return to the same place twice. Unfortunately, statistics show that if they weren’t caught the first time, there’s a good chance they will be back. After all, they now know exactly how to get in and out of your house safely, have a good idea of the home’s layout, and have a mental image of any valuables that it would be worth going back for.

Experiencing a single break-in is bad enough—being robbed multiple times is even more devastating. Learn what motivates repeat burglaries and how you can secure your home to prevent being robbed for a first, second, or even third time.

likely is it for burglars to rob the same house repeatedly?

Every 18 seconds, a house in the United States is burglarized. And sadly, once you’ve been robbed, it’s highly likely that you will soon be victimized again. These statistics and graphs from the Arizona State University Center for Problem-Oriented Policing demonstrate the extent of the problem:

Clearly, repeated burglary is a serious concern. To avoid becoming a victim, you need to understand what thieves look for in the properties they strike, why the same homes are often robbed multiple times, and how you can protect your home from further invasion.

burglars look for when choosing a residence to rob?

The University of North Carolina Department of Criminal Justice & Criminology questioned hundreds of incarcerated burglars to determine the factors that criminals consider when choosing a target. The study found that burglars are more likely to target properties that meet these criteria:

In contrast, burglars are more likely to avoid homes with the following features:

The sad fact is that most burglaries are never solved. In fact, “the FBI reports that less than 14% of burglary cases lead to arrests.” So, most burglars are free to continue their criminal activity unimpeded—even returning to homes they have already robbed multiple times. But why would they want to?

Unfortunately, the factors that make a home an excellent target for a first burglary generally remain unchanged. Although you may take more care to close and lock your doors once you’ve been robbed, you can’t change the location of your house, control the presence or absence of people in your home’s vicinity, or replace the sliding glass door in your rental with a solid brick wall. So, even if the first burglar doesn’t return to the scene of the crime, other criminals may find your property an inviting target too.

Watch this video on how police in Brooklyn Park, MN warned residents to take precautions against burglars who target apartment patio doors:

Plus, once a burglar has successfully broken into your property and made off with your belongings, they have several incentives to repeat the offense. Having been inside your home once, the thief now knows exactly how to get in and out and has confirmation that your house is likely to be unoccupied at a specific time or on a given day. They’re aware of any security measures you have in place, they know about other items that may be worth stealing, and they’ve had time to plan how to get any valuables they weren’t able to remove the first time. Furthermore, many people eventually use insurance money to replace the stolen items—thieves know this and are happy to return for a second round.

Again, homes are most likely to be re-burglarized within the first week following the initial robbery. This shows that burglars are smart enough to strike while the iron is hot. Even if you’re planning to make changes to prevent a recurrence of the first intrusion, many of the alterations you may be considering take time. Broken doors or windows may need to be repaired or replaced. Many security systems can’t be researched, chosen, and installed instantly (although preprogrammed systems can be ordered and put up within days). Even trimming trees, removing bushes growing too close to your home, or purchasing a guard dog require some time, energy, and expense.

So is the situation hopeless?

If you’re unfortunate enough to be the victim of a home burglary, must you simply accept the fact that it’s likely to happen again?

Of course not! While it’s best to take every possible step to protect your home from intrusion before it happens, there’s plenty that you can do to make further attempts on your property unlikely or unsuccessful.

your home after (or before) a break-in

Whether you’ve never suffered the indignity and trauma of a robbery or you’ve already experienced a break-in, there are several steps you should take to make your property as secure as possible:

There are many ways that a smart home security system helps prevent your home from being successfully burglarized. One of the most important is by acting as a deterrent to potential thieves. 60% of convicted burglars report being scared off by the mere presence of a home security system.

For the 40% of burglars who may not be discouraged, smart security systems still offer many layers of protection. Outdoor cameras with motion sensors alert you to the presence of trespassers on your property and recorded video clips can be used to later identify and convict offenders.

Doorbell cameras perform the same function at the front door, whether or not the thief rings the doorbell. In addition, Frontpoint’s Doorbell Camera is equipped with two-way audio, allowing you to safely order intruders to leave, whether you’re in your bedroom or at the office. Burglars may also be deterred by smart Light Bulbs operated remotely or on a schedule to make it look as though you’re home.

Frontpoint’s Door and Window Sensors notify you if a burglar opens the monitored door or window and they will cause your security alarm to sound within 30 seconds of being triggered if the system is armed. Often, this is enough to send an intruder running. If the thief breaks a window or sliding glass door within range of a Glass Break Sensor,  the results will be the same.

Door/Window Sensors and Garage Door Tilt Sensors can even notify you if a door, window, or garage door is left open longer than usual. With this technology, accidentally leaving things open all day and night is a thing of the past! Similarly, Smart Door Locks allow you to check whether your front door is locked or not, no matter where you are, and lock it remotely if necessary.

If an intruder does make their way to your home’s interior, Motion Sensors, Indoor Cameras, and Premium Indoor Cameras will catch them in the act. You will receive immediate notifications of their presence, triggered motion sensors will cause your alarm to sound, and any cameras will record it all, as well as provide you a real-time stream that’s accessible on your smartphone or another device.

proper safety precautions, you can avoid having someone break into your house

Although statistics indicate that once you’ve been burglarized, your chances of being victimized again increase, there is plenty you can do to secure your home from criminal activity. By seeing your home from a burglar’s perspective, you can take the action necessary to protect your property and safety. 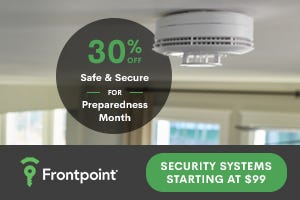 Do I Really Need a Home Security System?