The Best Home Alarm Systems – Who Makes the Best Equipment?

The Best Home Alarm Systems – Who Makes the Best Equipment?

This blog was originally published in February 2011. New product information was added in March 2020.

company that manufactures your home security equipment is different than the

company you buy from

Alarm companies do not make alarm equipment. Even ADT, one of the largest home security companies, does not manufacture the systems it sells—ADT buys the equipment from Ademco, DSC, Honeywell, and Interlogix. In the home security industry, the company that sells you the equipment and takes care of the monitoring of your home security system is known as a “dealer”—and there are roughly 13,000 dealers in the US alone.

Other, smaller equipment manufacturers have been around for decades: DMP, Napco, and Visonic are good examples. Each company’s technology has its advantages and adherents, and many alarm companies stay with the same equipment for years—until there is a compelling reason to change.

And what about Frontpoint?

Frontpoint continuously reviews and tests products from trusted manufacturers—and as a wireless system, we focus on wireless home security system manufacturers. While we commonly use DSC, Interlogix, and GE Products equipment, we strive to provide the best products possible to our customers. As new players come into the market providing smart home devices, we have expanded to using Yale and Jasco developed products, including our smart door lock and smart light bulbs.

Starter packages combine popular security products, making it easy for a customer to assess what they need. All packages come with door and window sensors, motion sensors, and signs and decals. Package variants add additional sensors or other security products, such as a glass break sensor, to the package. For all of the packages, you can select additional items like indoor cameras and smoke and heat sensors.

Pre-programmed devices significantly reduce the time (and complication) of adding equipment to your security system. All Frontpoint devices work together through our proprietary Hub, which allows easy integration of new products. And a full system set-up usually takes about 30 minutes.

To learn more about security systems, read our blog: “Do I Really Need a Home Security System.”

Frontpoint makes life easier and more efficient. We've been revolutionizing the home security industry for over a decade. And we're just getting started. To shop DIY home security systems, check out our Security Packages. If you have questions or would like to discuss a quote, contact us at 1-877-602-5276. 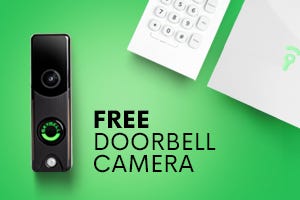